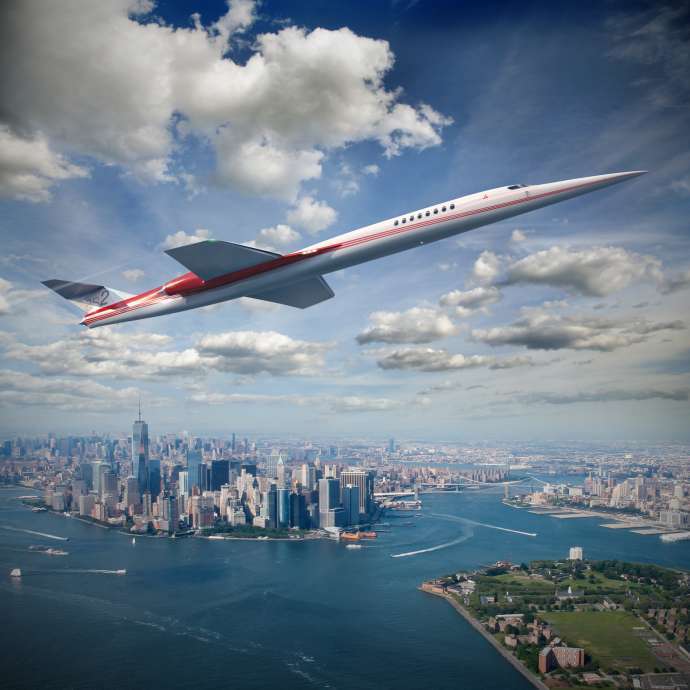 Aerion, the future of private jets

What is being referred to as the “Concorde’s replacement” will begin operating in 2023, although it is only designed for private flights.

Just like commercial aviation and any other industry, the private jet sector is experiencing increasingly significant advances. Since the Concorde’s last flight in 2003, supersonic passenger flights have become a thing of the past.

However, Aerion Corporation, in collaboration with Airbus, is already working on the development of the Aerion AS2, a private supersonic jet that will revolutionize private aviation in the next few years.

London – New York in less than four and a half hours? Yes, in that time, the Aerion AS2 will be able to travel a distance that currently takes seven hours.

This past November 16th, Robert Bass, the Texan businessman and philanthropist behind the project, announced the prototype’s first order in Las Vegas. The carrier, FlexJet, has ordered 20 units. The AS2 is expected to begin test flights in 2021, with an official market launch in 2023.

Private jets that will travel faster than the speed of sound

The technology to be used in the reactors will be specified in 2016. This is a major challenge because it involves finding a solution that complies with ‘Stage 4’ noise requirements and also guarantees long-range supersonic performance.

Preliminary carbon fiber designs have already been created for the structure, along with a new and innovative retractable landing gear device that reduces the space needed in the fuselage to store it, and an integrated fuel system equipped with the “fly-by-wire” digital system to control the center of gravity.

In combination with the design process, AIRBUS D&S has built a sample using cutting-edge titanium technology for the wing in order to evaluate, test, and optimize the material.

Lufthansa Technik AG and F. List will form a partnership called Inairvation to design the cabin.

Aerion will begin building a 40-acre complex in 2018 for the final assembly.

Time is an extremely resource for travelers, so it is no surprise that the slogan for the AS2 is “It’s about time.”

A solution for luxury travel

As we mentioned earlier in the post, the Aerion AS2 has been created for private flights, so only a few wallets will be able to afford it.

The interior will be manufactured using the best materials and maintaining the existing comfort levels of private jets, with similar seat dimensions and the same features. Materials that reduce sound levels will also be used so the cabin is as peaceful as that of a subsonic aircraft.

Aerion Corporation is based in Reno (Nevada) and was founded in 2002 with the aim of developing supersonic air transportation. The Aerion SBJ (Supersonic Business Jet) was the company’s first concept. The SBJ’s key technology, the supersonic laminar flow, was tested by NASA and it has evolved into a number of phases that led to the creation of the Aerion AS2.

The current objective is to establish agreements with other companies such as NetJets or DeerJet in China.

Thanks to existing technological developments, smaller aircraft are able to fly farther and faster. Our question is whether this technology can be applied to commercial flights, such as the Concord. Will another type of technology be created along the same line? These and other questions will be answered in time. There will definitely be changes in the aeronautical industry.