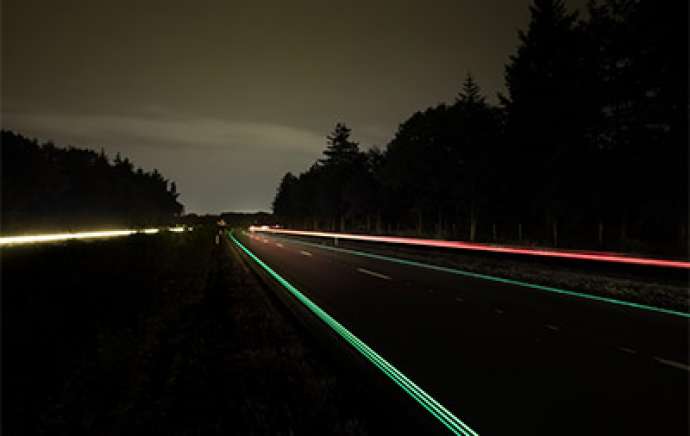 Luminous energy, solar panels, and sensors: The future of roads

The revolution of the Internet of things, technological advances, and new needs are closely linked to sensor technology, the use of solar panels, and renewable energy. We have discussed the future of private passenger transportation in several posts about sustainable initiatives, self-driving vehicles, and electric cars. It’s time to focus on smart highways, for which a variety of technologies are currently being applied or will be implemented in the near future.

If vehicles evolve, then so must their surroundings, starting with the roads they drive on, so let’s analyze some of the top developments in this area.

The Japanese car manufacturer Nissan differentiated itself from the competition with the Nissan Leaf, an electric vehicle that reached the market in 2010. A subsequent version included a new feature—it glows in the dark. This is the first electric vehicle coated in paint that uses UV energy absorbed during the day to glow between 8 and 10 hours at night.

Turning our focus back to the matter at hand, Nissan is applying this technology in another project that involves the Dutch designer Daan Roosegaarde and Heijmans, an infrastructure firm. We are talking about Smart Highway, a cutting-edge project that replaces the traditional paint used on roadways with a glow-in-the-dark lining that absorbs energy during the day and glows in the dark. A 600-meter stretch of the N-329 in the Dutch city of Oss is already using this technology that promotes interactions between the asphalt and vehicles.

A similar concept is the Van Gogh bicycle path, located in the province of Eindhoven, that was built using thousands of sparkling stones that emit light at night.

Roosegaarde was apparently inspired by jellyfish to create this innovative roadway solution that offers energy and light savings.

Another aspect of the project is dynamic paint that changes color according to the temperature in order to warn drivers of potential snow or when the road may be slippery. We are witnessing another new reality, which is that these initiatives also improve highway safety.

The United Kingdom has also shown interest in the project. The British company Pro-teq has vouched for Starpath. Cambridge authorities are lighting city roads and bike lanes by using a non-slip elastomeric substance that absorbs UV radiation during the day and releases it at night.

This year, the United Kingdom is expected to test roads that charge electric vehicles as they drive. Hybrid cars can also benefit from this advance. Highways England has announced that special electric cables embedded in the asphalt will create electromagnetic fields that vehicles fitted with wireless technology will be able to draw and transform into energy in order to move.

A similar system has been implemented in South Korea to power OLEV electric buses that travel along the road.

Solar panels integrated in roadways have been around for a while. In 2006, the American project Solar Roadways took advantage of solar power to supply homes with electricity by means of solar panels and sensors.

Wattway is the name of another project that goes even further. It consists of a solar roadway that can charge electric vehicles as they drive, and it was developed by the French infrastructure company Colas and INES (the French National Solar Energy Institute). Wattaway is based on a photovoltaic surface that absorbs solar energy and produces energy locally. The system can also charge hybrid and electric vehicles, as well as power streetlights.

The last example is a project that the Spanish multinational Ferrovial has carried out in Dallas (Texas), where the LBJ Express highway was recently inaugurated. Sensors installed along the highway provide real-time information on weather conditions, incidents, or congestion levels. Drivers can choose between free lanes or toll lanes.

The fees charged for this highway vary according to the average speed and the number of vehicles that want to use the fast lanes. Non-rush hour fees are lower than rush hour rates.

Innovation in the field of transportation is resulting in countless projects that are incredibly attractive and also allow energy savings and a better quality of life.